In 1919, then President of Algoma Steel, W. C. Franz desired a golf course. Several sites were considered. However, his cottage was situated at the very end of Queen Street at the boundary of the City. The land next door to his cottage was selected.
16th Green
The 15th and 16th greens remain pure Stanley Thompson. The 16th hole best demonstrates the Thompson genius. Nary a bunker on the hole, 16 is an example of design minimalism, utilizing the natural landscape to perfection. It is down wind, tree lined, a dog leg right to left, with a lateral hazard bordering the right side, plus the fairway has a reverse camber, sloping from left to right. Driver is a poor choice from the elevated tee. A slightly elevated, surface drained, green also sloping left to right produces a very difficult two putt from above the hole.

Clubhouse viewed from west side.  Photo Circa 1920. 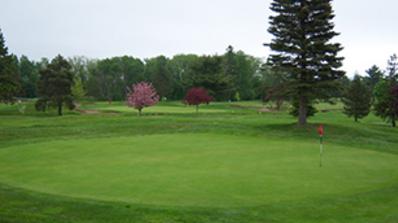 The Sault Golf Club has kept the Stanley Thompson feel, routing, style and design philosophy. It has been modernised sympathetically to produce a pleasant, playable course, with 4 or 5 tee decks, which can be enjoyed by all player abilities and be easily walked.

Many course upgrades have since taken place: the addition of an irrigation system in the early 1960s, and some greens redesigned, by another great Canadian course designer (and Thompson pupil) Robbie Robinson, in the 70s.

In the 1980s a massive increase in golf play and the introduction of new machinery that could produce much shorter grass heights caused some of the older greens to become unmaintainable. This forced, then greens superintendant, John Gall, to rebuild some greens and fix drainage problems. This piecemeal replacement of problem greens led to unacceptable and unplanned play disruption. John designed and rebuilt Greens 5, 8 and 14. It is a testament to his skill that these greens, for the most part, have stood the test of time. John Gall went on to become Greens Superintendent at St. Georges Golf Club, Toronto, another Stanley Thompson designed course, for 17 years.

To lessen disruption in play the club developed a master plan for green reconstruction, drainage and ponds, under the direction of Les Furber, of Golf Design Services, a Robert Trent Jones pupil (Jones was trained by Stanley Thompson). Because all alterations, repairs and new construction have been executed by designers trained in the Stanley Thompson ethos the golf course you see today, essentially retains the original layout and feel as designed by him.

Although a relatively short course—less than 6800 yards from the back tees—Thompson’s routing made the best use of Sault Golf Club’s small acreage. Holes with the prevailing wind have doglegs and hazards that preclude the use of a driver from the tee. ‘Into the wind’ holes are longer. The strategic use of water hazards, ditches and Clark Creek make the course interesting and gives a feel that it plays closer to 7200 yards. 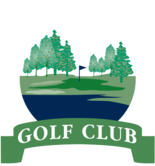 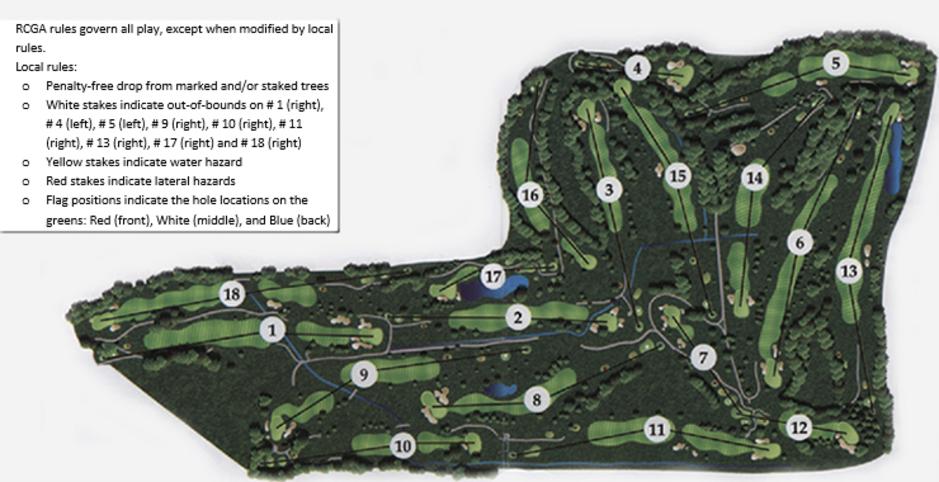 Click on the hole to open a detailed rendering. 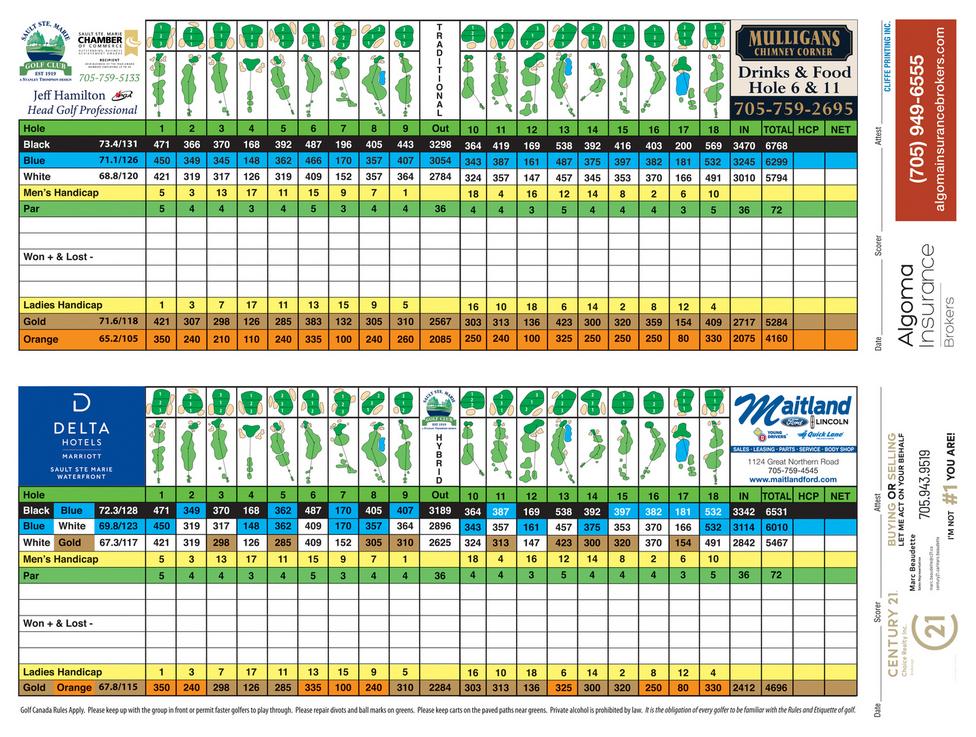 The course has hosted several Canadian Professional Golf Tournaments, most recently in 1999 and 2003. The former (1999) won by Aaron Oberholser, who rose to Top 25 on the PGA tour money list in 2006, and the latter (2003) by Mario Tiziani. Also, in 2008, the Sault Golf club hosted the Canadian men’s senior amateur championships, won by Graham Cooke.

The Sault Golf Club was originally a private club. It was then chartered as a not for profit, member owned, corporation in 1939. Since that time the Sault GC has been a semi private club, welcoming visitors on a daily green fee basis. The original, 1919, clubhouse over looks the St Mary’s River. In 2013 the clubhouse underwent a comprehensive renovation, so that it may remain open for 12 months of the year. It now provides elegant, affordable, dining and banqueting in a picturesque setting, and is open to the general public.  Reservations are recommended.

Our practice facilities include a driving range, a putting green, and a pitching range. These facilities are available for members and guest golfers.

PUTTING GREEN presents an opportunity for golfers to practice a series of breaking and sloping putts before teeing off.

PITCHING RANGE, located next to the clubhouse, offers 10-, 25-, and 50-yard targets and sand bunkers for practicing the short game.

Inquire with the Secretary or the Head Golf Professional to find the membership category best suited for you.